Film Non-Reviews: CABIN IN THE WOODS and MARVEL'S THE AVENGERS 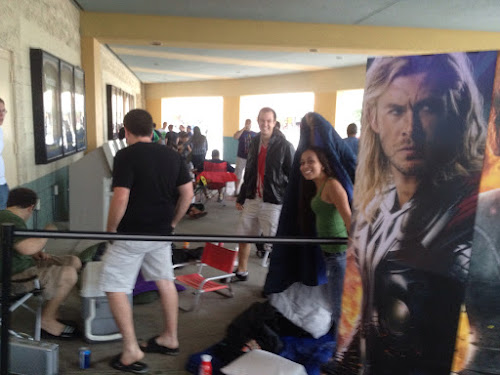 Joss Whedon is officially King of the Fanboys. All hail the King!

I've admired writer/director Whedon ever since his screenplay for the original Toy Story, and fell in love with his work thanks to the brilliant Buffy the Vampire Slayer. He's done great things since (especially Firefly and Serenity), but this weekend I had my mind blown by him all over again -- twice! And in all fairness, I really can't tell you about either of them.

For starters, I caught an opening day matinee of CABIN IN THE WOODS, his horror/comedy collaboration with director Drew Goddard (Cloverfield). The setup is strictly standard issue: a cliched Scooby Gang quintet --consisting of a college age jock, slut, nerd, stoner, and virgin -- party in a backwoods shack, seething off a supernatural slaughter. But Joss and co-writer Goddard proceed to deconstruct the formula, chop it up, and toss it as bloody confetti, while simulaneously constructing a brilliant conspiracy theory that thoughtfully examines the primal role of horror fiction in human culture. I can't tell you any more than this without ruining the immense pleasure this film provides genre fans. But suffice to say, if you enjoyed Evil Dead, Dead Alive, Dawn of the Dead, Halloween, or essentially any classic horror film from the last 30 years, the last half out of CABIN IN THE WOODS is the most wondrously bats&$t f@&king insane thing you have ever seen or imagined. 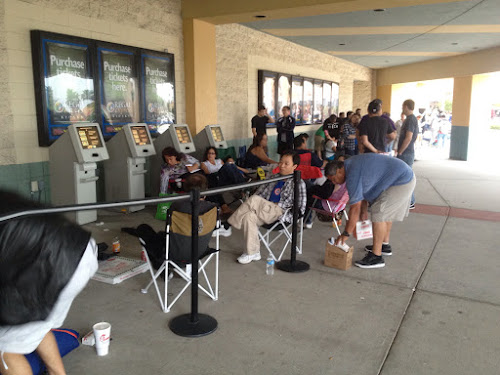 Then, early this past Saturday, I had the pleasure of hosting the Orlando premiere of Marvel's The Avengers, the comic book blockbuster that opens nationwide on May 4th. 380 fans who registered through Facebook got to attend the Regal Waterford Lakes movie theater for one of 10 exclusive IMAX 3-D premieres held across the country. I welcomed the capacity crowd and conducted a trivia a costume contest (with new Marvel toys for prizes) and then settled in to see the film. Unfortunately, I'm forbidden from publishing a review until the movie opens in three weeks. But suffice to say it finally satisfied my itch for epic superhero battles better than any live-action movie since Superman II. You want to go buy your opening-night tickets now, because I'm betting this will be the biggest movie of the summer.

Last week, I published the first part of a series examining my latest collectible from MouseSurplus. Here is the conclusion of that photo gallery documenting an original 1979 Polaroid-branded guidebook, which was given away free to guests of Walt Disney World over 33 years ago. The second half of the guidebook focuses on the resorts and recreation of the "Vacation Kingdom" outside of the Magic Kingdom theme park. Look for references to long-lost attractions like River Country, Discovery Island, and the Fort Wilderness train. Be sure to stop back later this week, when I'll be posting a 3-part series featuring an even rarer piece of WDW ephemera. 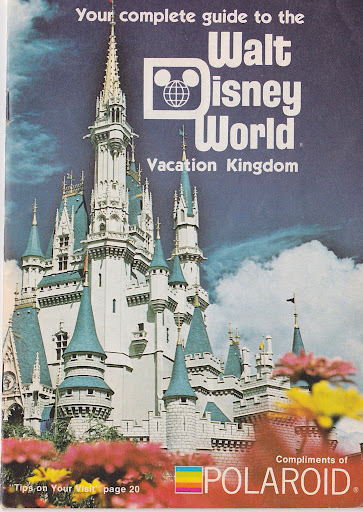 A little over a decade ago, I began acquiring a collection of Disney-related curiosities, largely consistingq of cast-offs from the theme parks. Over the years, I've assembled assorted furniture and decor from the Walt Disney World resort hotels, debris from decommissioned attractions (including a seat from Alien Encounter), and autographed artwork by some of my favorite Imagineering legends, like Rolly Crump and Claude Coats. The Great Recession has put a crimp in my collecting habits, but I still occasionally splurge on scraps of nostalgia. My most recent find comes from MouseSurplus, whose new storefront in Kissimmee is a must-see for serious Disney fans. Amidst the animatronic costumes and park-used signage, I spotted this 1979 copy of Your Complete Guide to the Walt Disney World Vacation Kingdom. This 28-page booklet was provided free to guests by Polaroid, a park sponsor at the time. Though the copy I purchased is not in "mint condition," I love that you can see p… 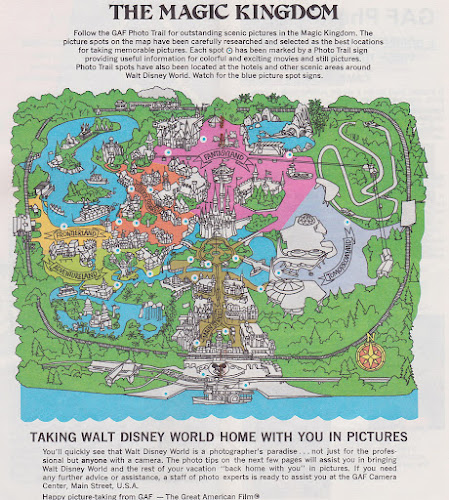 Here is part 2 of the photo gallery I posted Tuesday, featuring the 1972 GAF Walt Disney World guidebook I recently purchased from MouseSurplus.This installment features GAF photography tips, and descriptions of dining and shopping in the Magic Kingdom. I'll be back soon with a final round of pages covering the WDW resort hotels. If you enjoyed this, please also check out part 1 and part 2 of my 1979 Polaroid guidebook gallery.