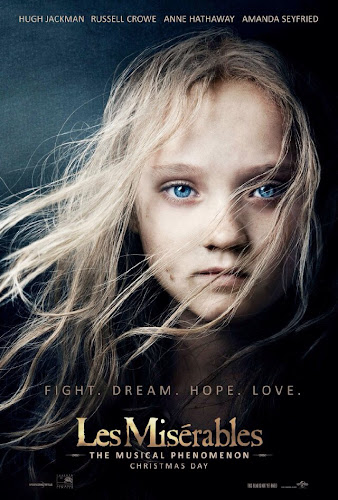 Les Miserables is arguably the most critically and commercially successful Broadway show of the late 20th century. Cameron Mackintosh's production of the Schonberg/Boubil musical marked the apex of the late 80's wave of British imports, and still claims millions of devotees nearly three decades after its debut. So any years-in-development film adaptation of such an icon must naturally be approached with trepidation. But as a Les Miz lover for a quarter century I'm pleased to report that, though imperfect, director Tom Hooper's interpretation easily exceeded my expectations.

Aided by cinematographer Danny Cohen and editors Chris Dickens and Melanie Oliver, Hooper innovates a new visual vocabulary for musical cinema; neither the stage-bound proscenium framing of the golden age, nor MTV-style quick cutting, but a gritty grandiosity born of handheld cameras, long takes, and extreme close-ups. The effect is occasionally uncomfortably off-putting, but more often engaging in its illusion of unvarnished intimacy. Most striking are the signature soliloquies, such as "Empty Chairs at Empty Tables," "On My Own," and "I Dreamed a Dream," which were captured in unbroken shots with live singing (as opposed to the standard studio-recorded lip-syncing), resulting in unprecedented in-your-face intensity.

Hathaway's devastating performance of that last song is the film's undisputed highlight, an Oscar-worthy rendition that rivals any of the best Fantines I've seen on stage. Jackman also does an admirable job; even if his high notes in psalm-like "Bring Him Home" don't have the operatic oomph of originator Colm Wilkinson (who cameos as a pivotal priest), he brings welcome emotional depth and range to the saintly starring role. The only leading performer not holding up his end is Crowe; his jaw may be sufficiently square for the self-righteous stalker, but his amateurish vocals vacillate from reedy whines to wannabe rock-star growls, neither of which can properly propel a show-stopper like "Stars."

Screenwriter William Nicholson (adapting Herbert Kretzmer's lyrics) cleverly clips some of the show's less essential recitative segments, replacing them with minimalist dialogue, to reduce the famously-long running time without sacrificing any of the beloved songs. The minor structural changes made, such as swapping the order of "I Dreamed a Dream" and the nightmarish "Lovely Ladies," serve to strengthen the narrative drive, and a few melodramatic elements from the source material -- including the urchin ingenue Eponine (Samantha Barks) heroically sacrificing herself for Marius -- were successfully restored. Still, a little more condensing could have been considered in the somewhat sluggish second half, and an ill-advised new ballad added at the midpoint would be better off excised.

Quibbles aside, this is a compelling initiation into the story for the uninitiated, and a friendly return to the fold for the faithful. Just don't forget to pack a box of tissues for the drive back; without a cathartic curtain call to lift your spirits after the heartrending conclusion, you're likely to be sniffling the whole way home.