Transformers The Ride Opens at Universal Orlando on June 20 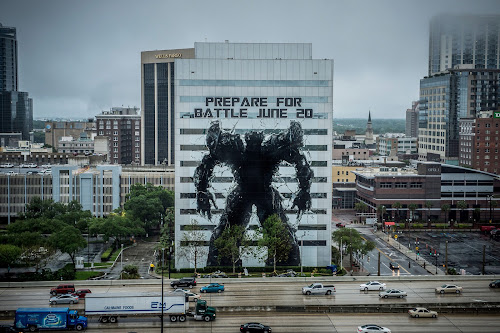 After months of speculation, Universal Orlando today announced an official opening of June 20, 2013 for their new 3-D Transformers attraction. A clone of the popular attraction already operating at the Hollywood and Singapore parks, Transformers brings the iconic 1980s robot toys (as cinematically reinterpreted by director Michael Bay) to life through a 3-D dark ride/simulator similar to Islands of Adventure's acclaimed Spider-Man ride.

Transformers can be found in the Universal Studios Florida park in a newly-constructed building on the site of the old Murder She Wrote and Hercules & Xena shows. The new ride's gift shop is currently open, and meet & greets with the attraction's Autobot and Decepticon stars are being held daily outside the attraction. Look of unannounced soft openings in the weeks before next month's grand opening.

Here is the full press release direct from Universal:

Orlando, Fla. (May 2, 2013) – Megatron and the Decepticons are closing in on Orlando…we must prepare for battle…

Universal also launched an all-new “Join the Resistance” Facebook experience to prepare fans for the battle they’ll experience on the mega-attraction. “Recruits” can create their very own NEST IDs, train for battle, access exclusive photos and video and win prizes – including a trip to the attraction’s grand opening celebration on June 20. Click here to join the resistance.

TRANSFORMERS: The Ride – 3D is a mind-blowing, action-packed ride experience that pushes the limits of technology to place guests in the middle of a larger-than-life battle between the Autobots and the Decepticons. The ride was created under license from Hasbro, Inc. and is based on its iconic TRANSFORMERS brand.

The battle begins when guests enter the NEST facility – the headquarters for the government operation that partners with the Autobots to protect Earth from the Decepticons. While inside, they are recruited to help protect the AllSpark – a powerful energy source that would allow the Decepticons to destroy the planet. Guests board EVAC – an Autobot created exclusively for the attraction – to transport the AllSpark to safety. But beware…the Decepticons are in close pursuit…

For more information about Universal Orlando and TRANSFORMERS: The Ride – 3D, visit www.universalorlando.com.